I was in front of Automattic booth last year, passing by as an attendee. This year I was behind it — as a representing member of the company 🙂

It was a blast staffing with these Automatticians at #wctokyo @jetpack @WooCommerce 💯🙌 pic.twitter.com/NAvT4DxHZI

WordCamp Tokyo 2018 — what a spectacular event! It’s amazing how fast time flew since my first WordCamp, and now I can say I’ve just attended my third 😀

The themes of the WordCamps I’ve attended strangely seem to directly coincide with how the past several months of my life have moved forward, most particularly in regards to my career & relationship with the Japanese WordPress community.

I remember the first time I attended a WordCamp, which was in Kyoto (July 2017), I went with a clear goal in mind: meet as many folks in Japanese WordPress community as I can & learn as much as possible.

WordCamp Tokyo 2017, the second WordCamp I ever attended, gave me an opportunity to contribute to WordPress with the community — I joined the Polyglots team for a day, and we worked on translating strings for WordPress.

Fast-forward to today, nearly a year later, and I’ve become a member of the Automattic family, now helping staff our Jetpack/WooCommerce booth at this year’s WordCamp Tokyo with my amazing colleagues 😀

My journey started off as usual from New Chitose Airport on Friday morning. But this time, I had a full day of work ahead of my flight to Tokyo, which was booked to depart at 3:00 PM.

We cover all costs of company travel, so dust off that passport! — Automattic

Since I had a three hour chat shift from 9-12 in the morning, and then a couple ticket shifts right before my flight, I decided to head to the airport early and work from there. I got to New Chitose at around 8:30am, checked in, and decided to just head to the terminal directly, since I knew there are readily available charging stations nearby. Got passed security, grabbed some breakfast at the Lawson, setup shop, and got to work 🙂 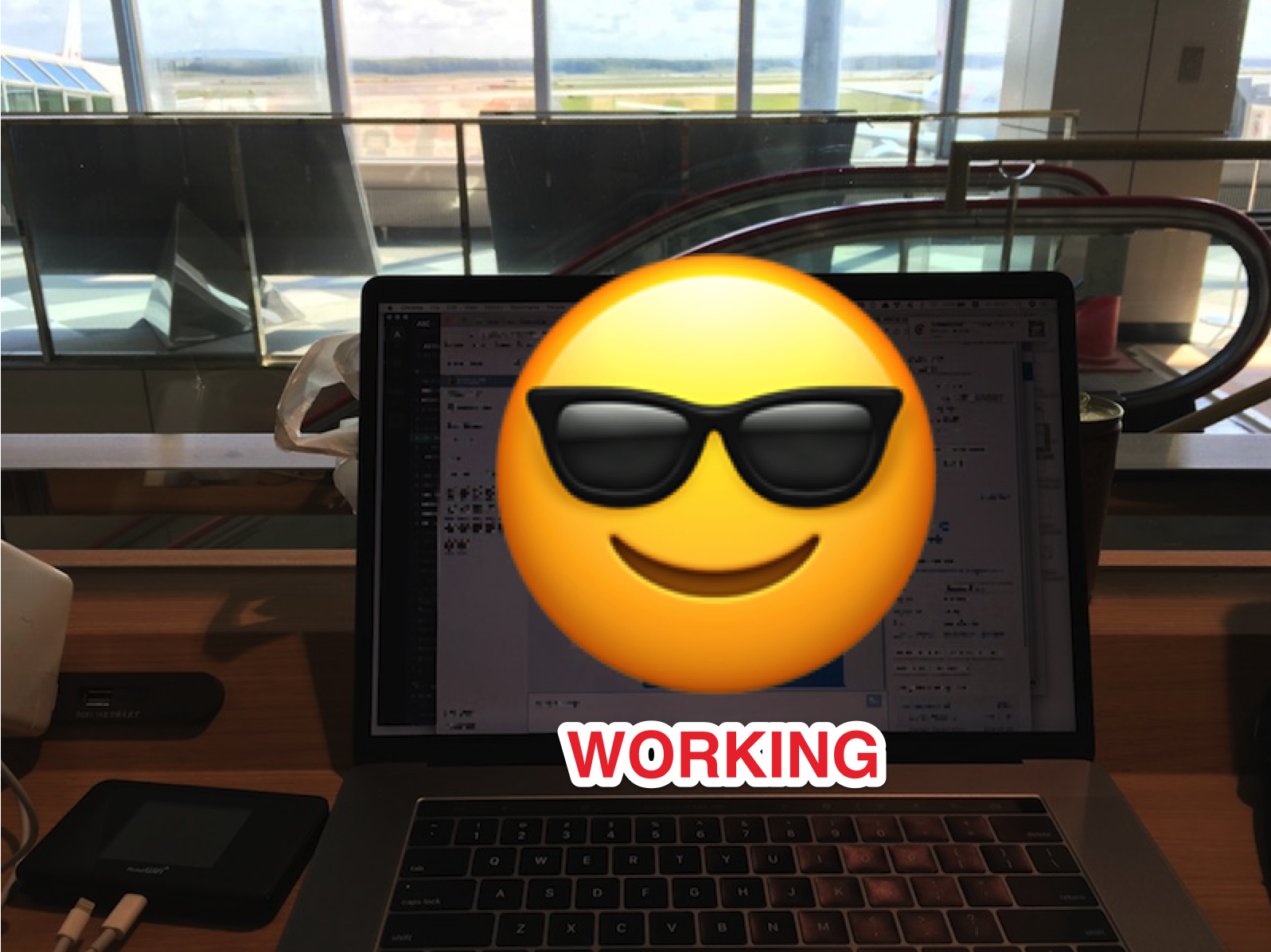 It was a surprisingly productive session, getting in my intended number of interactions for the hours I worked (if not more). Wrapped up my chats at noon, grabbed some lunch at the Lawson again — rayuu karaage-kun FTW — and worked on some tickets before I boarded my flight.

I passed the time on board watching ‘Jurassic World: Fallen Kingdom’ on my phone, which I pre-downloaded beforehand. To save the dinosaurs, or let them die and go extinct again — that was the dilemma. How many catastrophic events have happened since John Hammond opened Jurassic Park? Hmm, what should we do — let’s think about this one…

I arrived in Haneda at around 4:30, and went to the bus terminal. I think the last time, I took the JR into the city, but after discovering that bus might be faster, and most certainly less crowded, I decided to give it a try this time around.

The bus ride ended up being more pleasant than I thought. I was able to have a comfy seat to myself, and just enjoy the ride. I got to Shinjuku a little past 6, and once I stepped off the bus, I had one mission for dinner — FUUNJI.

I wasn’t able to go there the last time I was in Tokyo because the shop was sadly closed on the day I wanted go, but this time I was not leaving this city without having come here.

Do yourself a solid, and drop a note for some Michelin-grade tsukemen, I kid you not.

The hotel I stayed at was a business style hotel, Tokyu Stay Hotel. Conveniently located in the center of Shinjuku, and had no qualms about it.

WordCamp Tokyo 2018 was the first WordCamp for a lot things for me:

Our goal was of course to promote WooCommerce and Jetpack to the larger community. We engaged folks with our products by handing out some cool swag. And we also had a fun challenge where if they post an image of themselves in front of our booth on SNS, they could have a chance to win a Wapuu plushie or the grand prize being a pair of Sony wireless headphones. The grand prize remained unclaimed. But we did have two happy Wapuu winners!

Surprisingly (or unsurprisingly), there were actually many people who wanted to win the Wapuu over the headphones. I can see why though, how can you not want this? It’s soo cuuute… 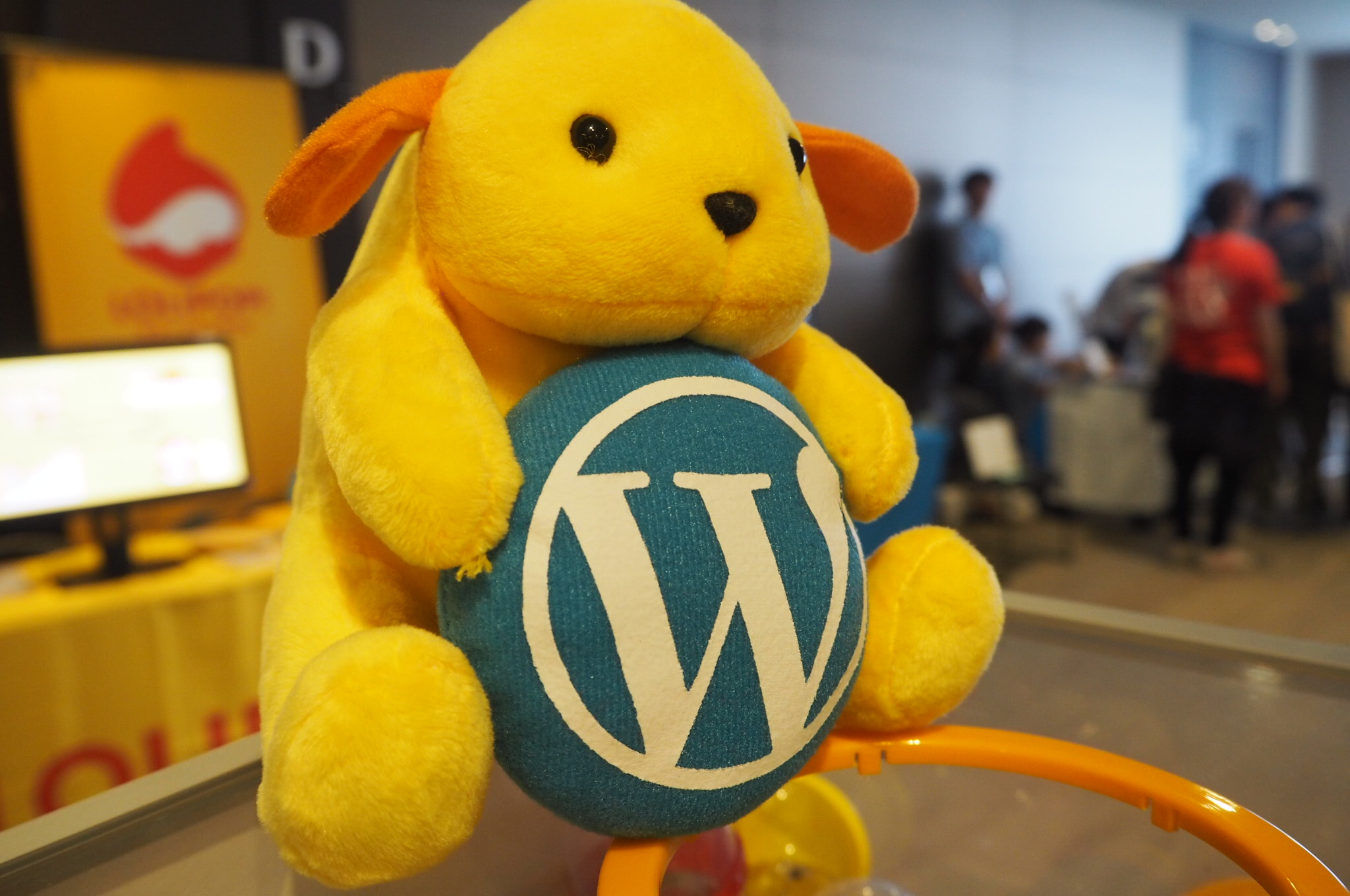 Meeting and working side-by-side with my colleagues was a great experience! Not that I haven’t done this before, but it only reminds of how grateful I am for the limited time we have each year to connect with each other in person.

I enjoyed seeing a lot of other familiar faces within the Japanese WordPress community, some of whom I met previously, and some others more recently from my last team meetup.

The afterparty for this year was held at a different venue, and was more of an actual party! TK Shibuya — a clubbing joint located a few minutes walk from Shibuya Station (Google Maps).

I didn’t take any pictures this time around, but here are some Tweets of the place 😀

I enjoyed the change of environment for the afterparty, and wanted to stay to the very end, but after a full day of staffing at the booth, I was just dead tired. I was able to get quite a few free drinks in though (thanks Susumu!), as well as drop some moves on the dancefloor near the end of one song! I literally had not done that in years. If anyone has footage of that, please send that my way — I wanna know how ridiculous I looked lol 😀

I headed out early, took a train back to Haneda Airport, where I checked in to First Cabin Haneda Terminal 1, the capsule hotel I booked my last night at, located conveniently inside the airport itself.

The next morning, I woke up early to do some souvenir shopping before I headed back to Sapporo — my departure time was 12:30pm.

I discovered the perfect shop to do my souvenir shopping for Keimei, 童心 (Dōshin). I highly recommend checking it out if you’re doing shopping for kids. It’s a neat little store specializing in antique toys. I picked up a book and a bath toy for the little guy.

Next up, the mandatory take-home souvenirs for my wife, and for a few other good friends. The next best thing aside from Tokyo Banana is N.Y. Caramel Sand.

After finishing up my shopping, I headed over to my terminal, downloaded ‘MI6: Fallout’ really quickly for my ‘inflight entertainment’, and then finally hopped on board and flew back to good ol’ Sapporo.

I really did wish I could have had more time to catch up and hang out more, but with the recent Hokkaido earthquake and daily aftershocks we’re still getting up here in Sapporo, I needed to head back home soon to be with my family.

As always, the Japanese WordCamp organizers and staff did a stellar job on making a successful event! I’m hoping to attend more WordCamps next year if I can. These events are such a great way to learn and experience what the WordPress community is all about.

So here’s a challenge for you — if you’re reading this and you’ve never been to a WordCamp before, visit this website https://central.wordcamp.org/, find a WordCamp near you, and attend! You’ll never know what neat stuff you’ll learn, or who you’ll meet. Who knows, you might even find some prospective career opportunities that you never knew existed 😉 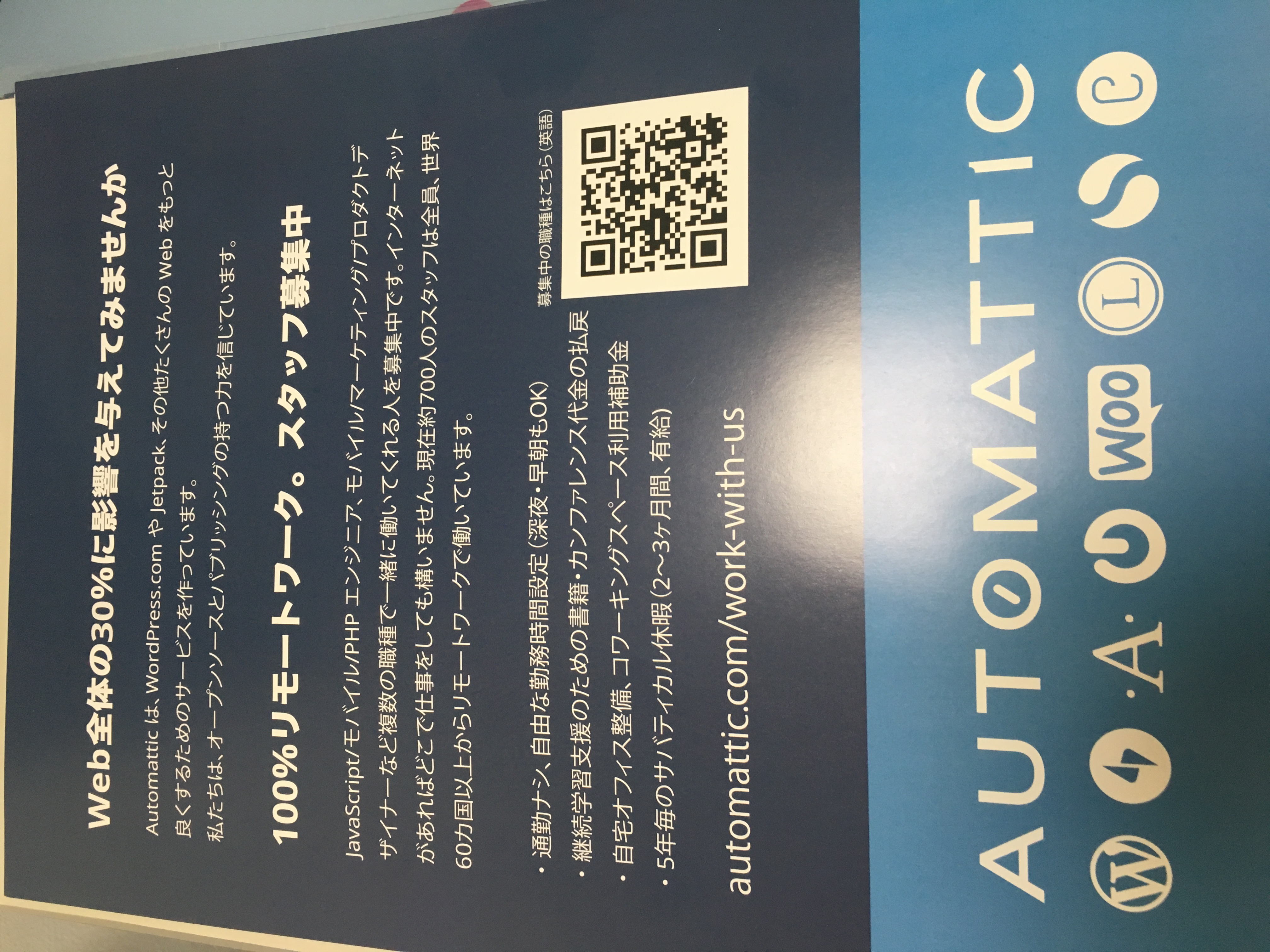 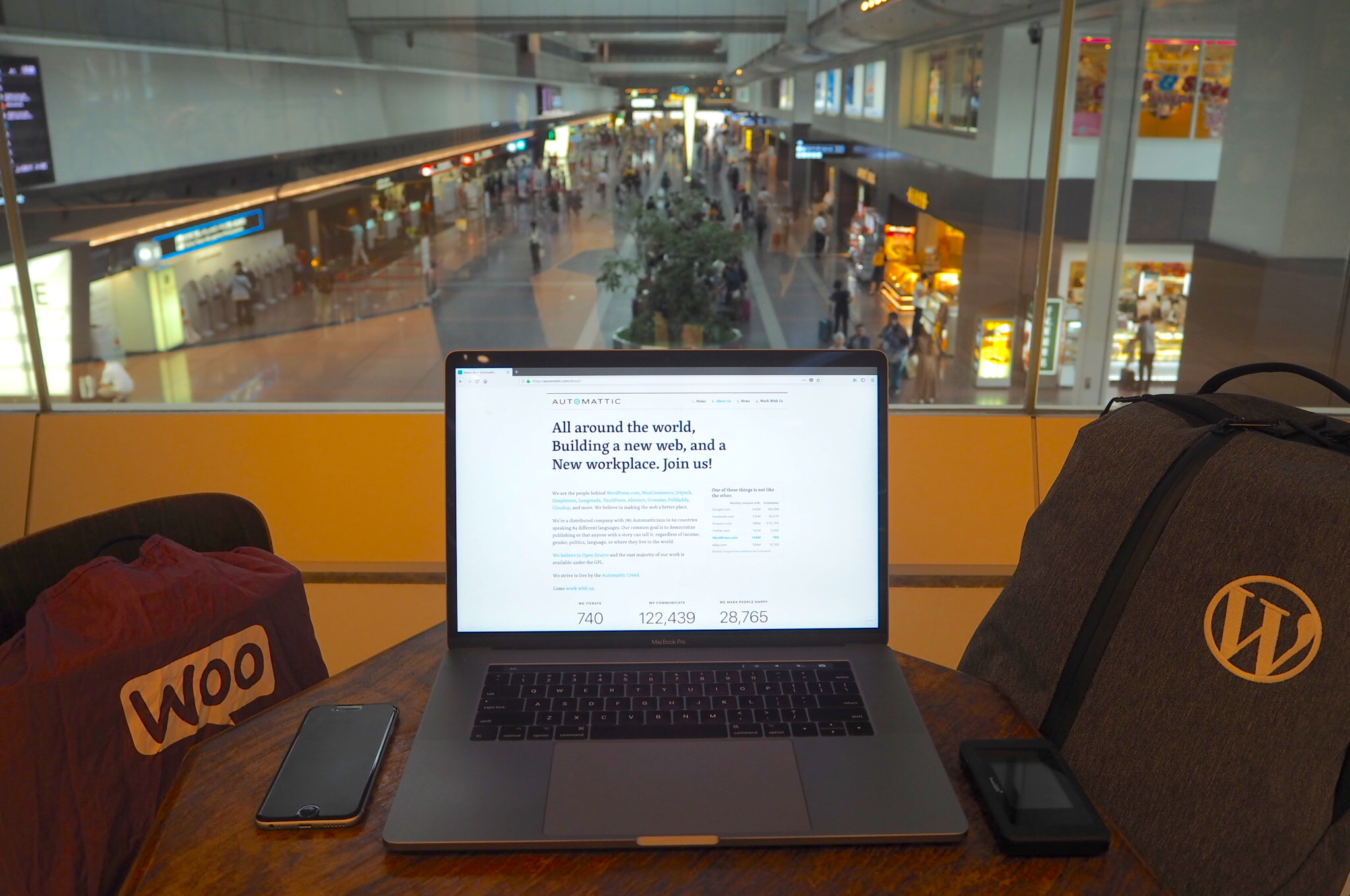 Like Loading…
← My Journey of How I Went From Teaching English in Japan to a Career in Tech With The Coolest Company in the World
→ WordPress.org VS WordPress.com: 2019 Edition